What Is A Columbarium?

A columbarium is a place for the respectful and dignified storage of cremated remains or “cremains” of our loved ones. The term comes from the Latin columba (dove) and originally referred to compartmentalized housing for doves and pigeons.  Historically, Roman columbaria were built underground.

Today’s columbariums can be either free standing units, or part of a mausoleum or part of another building. Some manufacturers produce columbariums that are built entirely off-site and brought to the premises by a large truck. Many modern crematories and funeral homes have columbariums. In some cases, columbariums are built into church structures.

In recent decades cremation with the internment of ashes in a columbarium rather than burial in public cemeteries has become increasingly common. In fact, the use of cremation has enabled the church to reclaim the century old tradition of the burial of loved ones on church property.

Trinity’s original building (which is today Mehaffey Hall) was dedicated on April 5, 1981.  In 1987 a second wing was added. Then in 1995 the third addition to the church was completed and dedicated.  This final addition included the church offices, additional classrooms, a chapel/columbarium and a new sanctuary which we currently use.

Trinity’s columbarium was designed and constructed under the visionary direction of Elder William Knox Wilson.  In recognition of his devoted efforts in creating and financing a chapel and columbarium, the church gratefully dedicated the columbarium and chapel in his name.  Elder Wilson remarked, “Not long ago, one of our parishioners remarked to me ‘I’ll die happy knowing my remains are going to be resting in the church I love and have served so long.’

Trinity’s columbarium contains three hundred fifty-two (352)   individual niches for the storage of cremains which are part of eleven(11) crypts.  As on June 2011, approximately ninety-three (93) niches remain available.  Of these, thirty-eight (38) are side-by-side niches.

For further information, including pricing, contact the church office and the secretary will have our Columbarium Manager make an appointment with you to visit our Columbarium and answer your questions.

One segment of Trinity’s niches and a cutaway view are shown below. 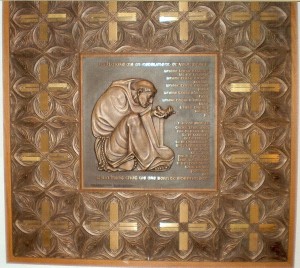 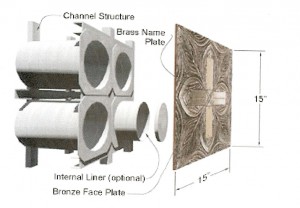